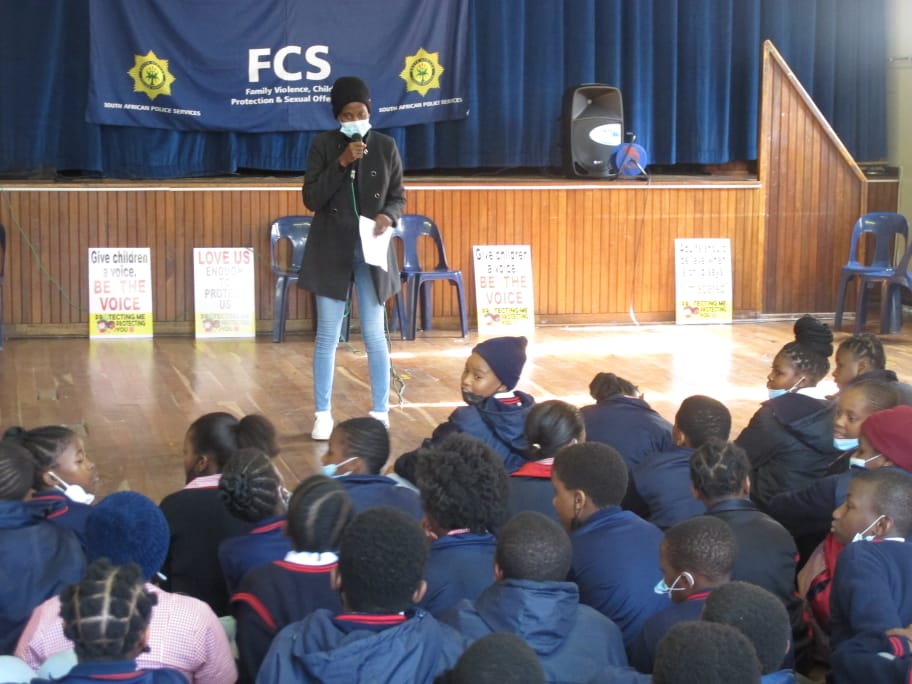 Mould Empower Serve (MES)’s Social Work Services (SWSs) says they will do their utmost best as their responsibility to protect children from any acts of violence, exploitation, and abuse which may render them becoming homeless. The organisation made the remarks on Thursday, the 2nd of June, during commemoration of Child Protection Week held at Laerskool Primary in Claremont, south of Johannesburg.

Under the national theme “Let us Protect Children during COVID-19 and Beyond” led by Department of Social Development (DSD), Child Protection Week is marked annually between 29 May till 05 June, to raise awareness of the rights of children as articulated in the Constitution of the Republic of South Africa and Children’s Act No. 38 of 2005.

As for MES Johannesburg’s Social Worker, Bongani Nxumalo, has encouraged an audience of more than two hundred Grade 6 and 7 Laerskool Primary learners to say no to the use of drugs, as well as, engaging in sexual activities at a young age. Nxumalo stressed the need for a collective enforcement in rooting out so called “blessers”, the adults who are involved in sexual activities with children in exchange for money or material items.

“It is the duty of the learners to enjoy their childhood, and not allow obstacles such as drugs, and abuse to determine their future. Blessers are messing up with the future which is in the hands of children,” said Nxumalo.

With the 5th Global Conference on the Elimination of Child Labour held recently and hosted by South African government in Durban between 15 and 20 May, Nxumalo condemned with strongest possible terms practices of child labour that are still prevalent in Africa involving 160 million children.

Meanwhile, Captain Thomas De Bruyn, of Sophiatown Police Station in Johannesburg invigorated the pupils to report to their teachers any acts of bullysim and selling of drugs which may be taking place in the school. While encouraging the learners to take their schoolwork as serious as their future, the captain maintained that children should be regarded as angels and not criminals.

“Do not think you’re too young not to get arrested. We have a juvenile prison designed specifically for young people like you, whom may fail to be disciplined and involve themselves in illegal activities,” beamed Captain De Bruyn.

The Child Protection Day commemoration featured Mosala Kelefetswe, 34-year-old retired drug addict who gave testimony to learners about his past miserable life of drugs and criminal activities. Kelefetswe confessed to the audience that while he became homeless because of indulgence on drugs, him and his friends would steal and rob people in the inner city of Johannesburg.

Interestingly, through the help of MES in 2013, Kelefetswe was rehabilitated through South African National Council on Alcoholism and Drug Dependence (SANCA), where he’s now a changed heart. Kelefetswe is now a Social Auxiliary Work student at the Joburg Child Welfare and is expected to graduate in July 2022.

“Firstly, I have accepted Jesus as my Lord and saviour. There are different activities one can do to avoid drugs, such as going to school and going to church. I chose to go to church,” said Kelefetswe confidently.

With this as a point of departure, while explaining the concept of drugs to the learners, Melita Maphoto, Coordinator for Kemoja Programme from SANCA’s office in Johannesburg said that they are working  a hand in glove in collaboration with schools to provide counselling and rehabilitate learners who have infringed the schools’ code of conduct by getting involved in drugs.

MES SWSs took the Child Protection Week commemoration to I.H Primary in Doorfontein, Johannesburg on Friday, the 3rd of June.